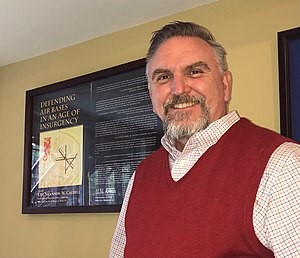 Col Shannon W. Caudill, USAF (retired), is a leadership development consultant, graduate-level leadership instructor, author, doctoral student, and Walker Executive Leadership Fellow at the University of Charleston. With over 17 years of college-level teaching experience, he has served as a faculty member and adjunct at the US Air Force’s Air War College and Air Command and Staff College, Lake Region State College, and the University of Charleston. A former Air Force colonel, he served as the Deputy Chairman of Air Command and Staff College’s Leadership and Strategy Department and led as a squadron commander (chief executive officer) for three security forces squadrons (one in combat) ranging from 95 to 1,000 people. He currently teaches leadership for Air Command and Staff College at the graduate and undergraduate levels to senior military officers, government civilian leaders, and congressional staff. He has been published in peer reviewed journals on the topics of leadership, military operations, law enforcement, insurgency, security, and terrorism, and is the editor and coauthor of the three-volume monography book series Defending Air Bases in an Age of Insurgency. Additionally, he is the coauthor of the 2020 history book Baseball in Kennesaw and the founder of an online baseball book sales business called Baseball in Georgia (www.baseballingeorgia.com).

Colonel Caudill, USAF (retired), served in the Air Force for 25 years from 30 September 1991 to 30 September 2016. His final military assignment was as the Director of Support at the Jeanne M. Holm Center for Officer Accessions and Citizen Development at Maxwell Air Force Base, Montgomery, Alabama. As the Director of Support, he was responsible for a $154 million budget, 42 facilities valued at over $200 million, educational and operational information technology, and human resources supporting over 132,000 personnel in the Air Force Reserve Officer Training Corps, Air Force Junior Reserve Officer Training Corps, Officer Training School, and Headquarters US Air Force Civil Air Patrol.

Shannon Caudill has taught at the graduate and undergraduate level as a member of the faculty of Air War College, Air Command and Staff College, the University of Charleston, and Lake Region State College (LRSC). As a member of the LRSC faculty, he organized and taught college classes for military members at remote locations in Greenland, Iraq, Kuwait, and North Dakota. He is currently a doctoral candidate in the University of Charleston’s executive leadership program and a Walker Executive Leadership Fellow. His dissertation research is focused on the leadership development experience of women in the Air Force officer corps.

Defending Air Bases in an Age of Insurgency Vol I-III 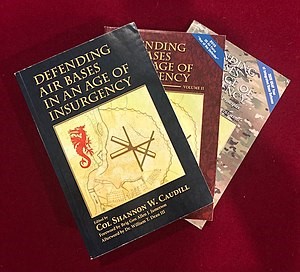