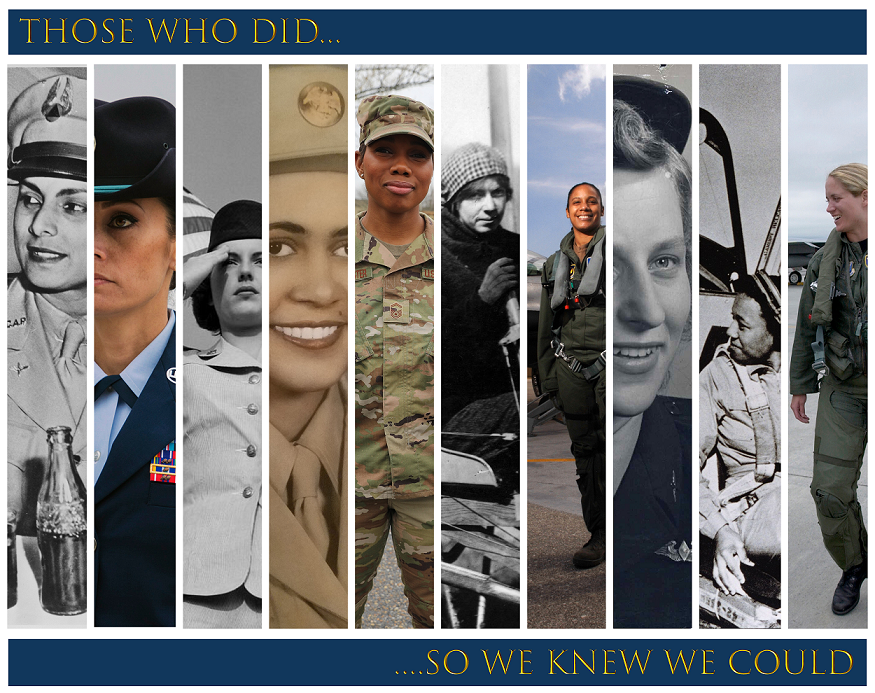 The fight for equality for women in the Armed Forces is an ongoing process requiring persistence, patience, and courage. During World War II, many women served their country in uniform as WASPs, WAACs, and WACs, performing many support duties that were previously performed by men, so that the men were able to move into combat roles. After the war, women continued to serve as WACs in the Army and the Army Air Forces. After the National Security Act of 1947 created the United States Air Force as a separate military service, Army WACs continued working in Air Force units. When Women in the Air Force (WAF) was created in 1948 by the Women’s Armed Services Integration Act giving women permanent status in the Regular Air Force and The Air Force Reserve, many WACs transferred into the WAF. On July 8, 1948, Esther Blake became the first women to enlist in the Air Force, joining the WAF the first minute of the first hour of the first day that regular Air Force duty was authorized for women.

The accomplishments and legacies of women serving in the Air Force have only grown since that day Esther Blake enlisted. In 1967, the first WAFs were assigned to duty in Vietnam and President Johnson signed Public Law 90-130, opening promotions for women to general and flag ranks. The first female Air War College student graduated from AWC in 1970 and Jeanne Holme became the first woman to achieve the rank of brigadier general in 1971 and major general in 1973. Women were admitted to the United States Air Force Academy for the first time in 1976 and the first ten women pilots graduated from the Air Force Undergraduate Pilot Training Program the next year. Women were assigned to missile crews for the first time in 1978.

On March 4th 2020, Air University Library opened an exhibit to celebrate and showcase well-known and unsung female pioneers who set the bar high, making it easier for those who followed. "Female Pioneers: Those Who Did, So We Knew We Could" was an exhibit to not only spotlight significant women but simultaneously foster education, awareness, appreciation, and inspiration that will resonate with individuals from various walks of life.

Women and the Armed Forces